Does Amanita Muscaria makes you trip?

Amanita muscaria, also known as the fly agaric fungus due to its ability to effectively repel flies, has been studied in mythology and science for hundreds of years. In medicine, amanita is used as a natural way to solve the problems of arthritis, swollen joints, menopause, and is an effective remedy for pain. But lately, as people increasingly turn to mythology, shamanism, and the search for a spiritual path, this eye-catching red and white mushroom is receiving more and more attention.

One of the most topical questions these days – does amanita muscaria trip exists? Let’s look back when the amanita mushroom was used in shamanistic rituals. History tells us that the Sami people of Lapland, a region in northern Finland known for its wintry climate, would wait in their houses to be visited by shamans, which would perform healing rituals using the amanita muscaria that they considered so holy, that the shamans dressed up like the mushrooms for their visit. With deer-drawn sleighs, a shaman descends through the chimney and brings healing and problem-solving gifts. This whole ritual was always rewarded with plenty of food. Not only that, but amanita fungi also make you feel like you fly, and mycologists have noticed that the reindeers love these red and white mushrooms. Doesn’t that evoke any associations? According to Professor Carl Ruck and mycologist Lawrence Millman – “blame it on the shrooms!”. This weird-looking fungus that people like to call a Mario mushroom is perhaps one of the reasons why we have Santa and a flying reindeer today. This story, revealed by mycologists and professors, proves that there is no need to doubt the possibilities of amanita mushroom journey.

What makes amanita muscaria so special? The composition of this red and white toadstool is far more unusual than other magic mushrooms, which usually contain psilocybin. The structure of amanita muscaria contains and psychoactive components as muscarine, ibotenic acid, and muscimol. There are only five plant species in the world, all of which are members of the agaric type that contain these last two particular amino acids. Unlike psilocybin, these two acids act on different parts of the brain.

We’ve already found out that this red and white beauty, also known as the fly amanita, makes you trip, but what specific effect does this mushroom have? Mythology indicates that this fungus would act as conduits between the human and the spirit world. Depending on the dose, this amanita muscaria can give you an extraordinary influx of lightness, joy, courage, energy, and sometimes even hallucinations. The discovery miracles of the spiritual path described in the books, encourage people to embark on a journey of these elevated feelings today.

Going back to history, the researchers point out that people in Siberia drank their shaman’s urine because they were unaware of the dosage of amanita mushroom and were afraid of poisoning. The human urine that consumed fly amanita no longer contains toxins, but it is still highly psychoactive. Living in the twenty-first-century, drinking urine is no longer necessary to protect yourself – today this fungus has been thoroughly studied by scientists. As a result, we have a wide selection of safe and, of course, much more pleasant products for every purpose of use – amanita muscaria dried caps, tea, creams, elixirs, tinctures, etc.

This Mario mushroom of amazing beauty, living next to us for many years, is not as dangerous as it may seem. The dangers of this plant can be boldly compared to alcohol – it will not kill you unless you puke and inhale your vomit. Using too much of amanita muscaria, like consuming too much alcohol, will not be one of the most enjoyable experiences.

How to achieve the desired effect? It is important to understand that the size and effect of the dose used for each person may be individual, so it is recommended to consult a doctor. However, researchers say that the average and most commonly used dose for a healthy person is between 5 and 10 grams, and the stronger dose rages 10 to 30 grams. In any case, the journey starts after about 30-90min. and can last from 4 to 10 hours. Both doses, but on a different level, will take you on a journey of increased feelings of connectedness – the average dose will make you experience a feeling of extraordinary lightness, the inrush of joy, and energy. Meanwhile, at high doses of amanita muscaria, the journey can look truly impressive – in addition to the effects listed above, hallucinations, tremors, and an expanded view of the world are guaranteed – a glass of water can become the largest ocean and an open doorway can become like an abyss.

Undoubtedly, for hundreds of years, amanita muscaria has been one of the most mysterious and interesting companions in self-discovery journeys. 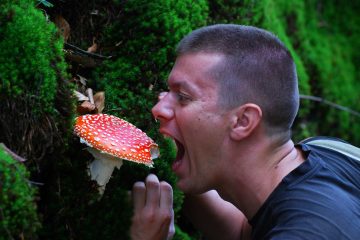 Amanita Muscaria is a hallucinogen of  natural origin, the active substances of which are muscimol and ibotenic acid. To achieve the effect, red mushroom is eaten fresh or dried. The effects appear within half an hour or Read more…

Often called, just the beauty of the forest. It is poisonous, but is often chosen for the manufacture of folk remedies for joint pain. Cap: 5-15 cm in diameter, young hemispherical, older flattened, protruding, sticky, Read more…